While treating patients for depression, anxiety, and ADHD, Dr. Slavit has also authored several books, including

​He has multiple works currently in progress, including a book entitled A Brief History of the Universe, the Earth and Life (Illustrated with Limericks) 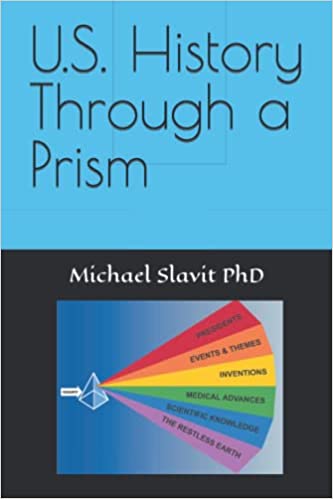 U.S. History Through a Prism

History is often taught as a series of events, without the context of the scientific knowledge, medical practice, or inventions that were current at the time of those events.

At the birth of our nation, we had no roads, cars, telephones or radio. Health care was abysmal. Communication and transportation were no faster than the horse. Through a series of inventions over 235 years, we have cars. highways,air travel, telephones, radio, television, cell phones and the Internet.

Blood-letting was the only medical practice 235 years ago and it was not even known that it was a good idea for doctors to wash their hands. Throughout our history we have developed the germ theory of disease, sanitation, vaccines, X-rays, antibiotics, MRI, laser treatments, organ transplantation, and precision medicine based on the mapping of the human genome. 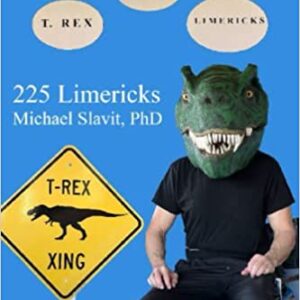 Dr. Michael Slavit describes himself as a combination of serious/profound and silly/whimsical. This is clear and evident in his book “225 Limericks.” 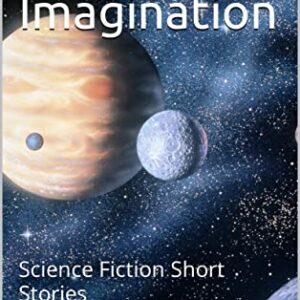 Taking existing issues and trends and projecting them into the future makes science fiction an exciting treat. And, if this can be accomplished with short stories — not requiring you to slog through a lengthy novel — so much the better!

There are tens of thousands of objects in orbit around the Sun. If a large such object were to be found on a trajectory to strike Earth, a cooperative multinational effort might be needed to divert it.

We are rapidly developing artificial intelligence. Such visionaries as Elon Musk and the late Stephen Hawking have warned that runaway growth of artificial super-intelligence could spell the end of the human era. 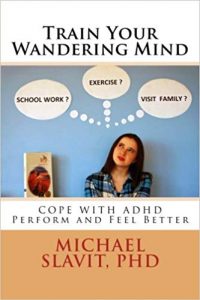 We live in a highly over-stimulating world. Daily life places enormous demands on us to process and respond to information. It is no wonder that ADHD is such a rapidly growing diagnosis—with children and adults of all ages coping with the disruptive forgetfulness, frustration, and organizational issues of this modern-day epidemic.

For many patients with attention deficit disorder, medication is considered the remedy of choice. But what if you had the power to cope with the symptoms of ADHD more effectively? What if all it required was a selection of mental exercises along with your own motivation and effort?

Drawing upon decades of experience as a board-certified psychologist, Michael R. Slavit, PhD, knows that the ability to train your mind is real—and through the twenty unique exercises in Train Your Wandering Mind, he is here to show you how.

Whether you are dealing with adult attention deficit disorder yourself, or parenting a child with ADHD, this book will help. It is filled with expert advice and specific exercises that will help patients change their perceptions, thoughts, and behaviors in order to achieve more organized and successful lives. 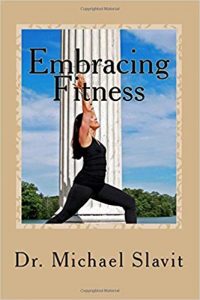 This book will help propel readers toward a life of health and fitness. Most people recognize the importance of exercise and fitness and the role they play in physical and mental health. Nonetheless, many people experience great difficulty maintaining a fitness regimen. Board Certified Psychologist Dr. Michael Slavit understands the reluctance people experience, and balances this understanding with a challenge to the reader to face and overcome this resistance. Dr. Slavit cites the growing body of research that has proven that exercise does more than strengthen the body and the immune system. Exercise also strengthens the brain, and helps to prolong our mental abilities. The reader will be introduced to six types of exercise: strength, cardiovascular, stretching, balance, and core stability training, as well as mind-body integration systems such as Yoga and Tai Chi. Many basic concepts in these types of fitness activities are lucidly explained. In addition, exercise is described as part of a fourfold program of health, including nutrition, sleep and a strong mental attitude. Dr. Slavit encourages readers to embrace life and fitness, and to place exercise and fitness into its proper perspective. He cautions readers not to “lose the meaning” of their fitness efforts, but to be sure exercise is “in service of” a healthy and happy lifestyle. Dr. Slavit closes with an eloquent description of the wonder of life, and with his encouragement to readers to embrace life and fitness. 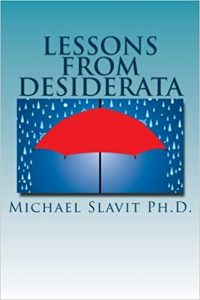 For nearly a century, Max Ehrmann’s famous poem “Desiderata” has inspired people. But what do you do with stirring words? How do you act on the insights they provide? How can they change your life in an enduring way?

Rather than presenting an interpretation of the poem, psychologist Michael R. Slavit, PhD, shares his practical and psychological perspectives on how to live its truths. Organizing the poem into nineteen offerings, he suggests concrete ways you can practice Ehrmann’s wisdom in your everyday life.

From being on good terms with all people, to speaking your truth quietly and clearly, to keeping peace in your soul, the lessons covered in this poem are all encompassing. Though “Desiderata” serves as a springboard, this guide draws from Dr. Slavit’s forty-year career in human services and provides proven principles for happiness as well as ways to recognize and refute typical irrational beliefs.

Grounded in psychology, philosophy, and science, Lessons from Desiderata helps you achieve the peace and joy the poem encourages as you learn to “be gentle with yourself” and “be cheerful”—no matter what life throws your way. 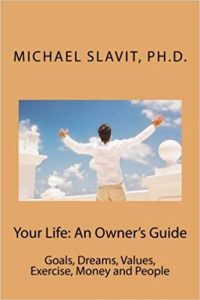 Your Life: An Owners Guide

Recover from feeling that your life lacks purpose, direction and focus, and infuse your life with a sense of mastery and zest.
First, organize your life around your basic values, goals and dreams. Then, learn to conquer stress and anxiety, and to cycle quickly out of depressions or slumps. Next, incease your competence at handling “the nuts and bolts” of daily life. Find out how to avoid faltering on your exercise regimen. Learn the easiest and most effective way to manage your money. Acquire the skill to beat the pitfalls of clutter and disorganization.
This book is the product of more than thirty years of the author’s experience. He has helped people – individually and in groups – to escape their feelings of being stuck aimlessly meandering through life without a full sense of competence and mastery. After learning these methods and skills, clients describe their lives as feeling “crisp” rather than lifeless, zestful and not tiring, with better focus, competence and joy.
Read, and begin your journey toward a happier and more focused, organized future.