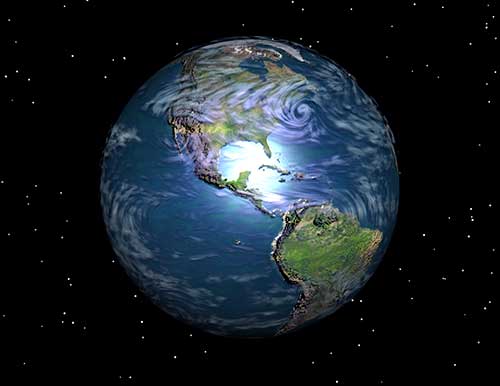 In 1858 the geographer Antonio Snider-Pellegrini made two maps, showing how the American and African continents could have fit together and later separated. It was not until 1912 that the German meteorologist Alfred Wegener proposed that all the Earth’s continents were once joined into a supercontinent called Pangaea. It took another forty years before the concept of continental drift was finally widely accepted. We now know quite clearly that the crust of the Earth – containing all the Earth’s continents and ocean floors, floats on the next layer of the Earth, called the mantle.

The Earth’s crust does not exactly float on the mantle the way your ice cube floats in your glass of soda. It’s a much slower process, with crustal plates moving an average of one inch per year. That’s pretty slow in our day-to-day experience. But, what if you had 60 million years to do the job? 60,000,000 years at one inch per year would mean 60,000,000 inches, or 5,000,000 feet. At 5,280 feet per mile, that would equal 947 miles. So, given enough time – sometimes known as “geological time” or “deep time” – you could re-arrange the Earth’s continents.

And what do you think is the power source that’s causing all this shifting? It’s heat, specifically, heat left over from the formation of the Earth 4.6 million years ago. And what are the most dramatic events that we human beings get to witness as a result of the Earth’s constant attempts to release its primordial heat? You probably have guessed: volcanoes and earthquakes.

A few websites of interest: